Air Water Inc. is pleased to announce that Nihon Dennetsu Co., Ltd. (Hiroyuki Matsuda, CEO and President; head office: Azumino-shi, Nagano), an Air Water Group company that manufactures and sells various heating equipment, has decided to construct a new building for manufacturing heat control equipment for major semiconductor manufacturers in Japan on the premises of its Azumino head office and plant. The company made this decision in anticipation of rapid expansion of the semiconductor market. Construction of the new building is planned to be started in January 2022 and completed on September 30 of the same year. 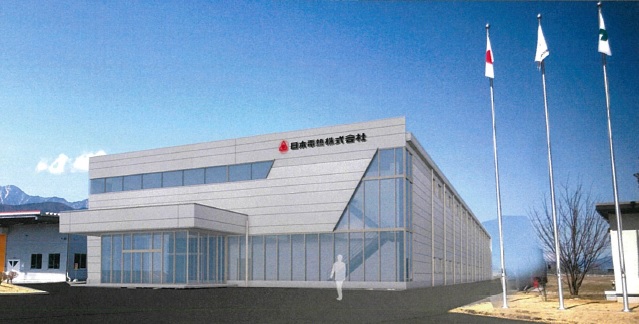 Air Water Inc. believes that the electronics-related domain, the market for which is expanding rapidly, will continue to drive the growth of its industrial gas business in the future. In response to the ongoing increase in production by major semiconductor manufacturers in Japan, the company is advancing construction of large onsite plants on an unprecedented scale, so as to supply nitrogen gas, which is essential for the semiconductor manufacturing process, via pipelines. The company is also expanding its business domains in peripheral fields, such as special chemical materials, the equipment for supplying them, and gas purification equipment, aiming to obtain a position comparable to that of the global gas giants in the electronics field.

In 1949, just after the end of the Second World War, Nihon Dennetsu became the first company in Japan to successfully develop and domestically manufacture the sheathed heater, the precursor of heaters. Since then, Nihon Dennetsu has been built an extensive track record in the field of heat in numerous industries. As a result, it holds the leading market share for industrial heat control equipment in Japan. In addition, by taking advantage of the heat control technologies it has developed through many years of operation, Nihon Dennetsu supplies heat control equipment, essential for manufacturing semiconductors, to major semiconductor manufacturers. They include hot plates, which evenly heat wafers, and cooling plates.

2. Overview of the new building to be constructed