Air Water Inc. is pleased to announce that Air Water Hydrogen Corp. (Satoshi Miyano, President and Representative Director; hereinafter, "Air Water Hydrogen"), an Air Water Group company engaged in the production and sale of hydrogen gas, will install the VHR hydrogen gas generator at its Nihongi Plant (Joetsu-shi, Niigata) with the aim of establishing a system for the stable supply of hydrogen gas in the Koshinetsu area and increasing production capacity. Developed by Air Water Inc., the VHR is capable of generating hydrogen gas from natural gas with world-leading efficiency. Renewal of the plant will start on August 1 and is planned to be completed in April 2022.

1.    Background and purpose
With 11 sites for producing compressed hydrogen and nine for the onsite supply of hydrogen gas in Japan, the Air Water Group is a leading hydrogen manufacturer in Japan. Onsite supply means installing a generator on the premises of the customer's plant and supplying the gas from the generator. The Group also delivers the gas via trailers or cylinders. The Group reliably supplies hydrogen gas to customers by choosing the optimal method of supply according to the consumption volume and location of each customer. Air Water Hydrogen is the core company of the hydrogen gas business of the Air Water Group. The company supplies hydrogen gas to customers in a wide range of industries, including semiconductors, chemicals, glass, optical fibers, shipbuilding, automobiles, energy, and food. It engages in the production, transportation, and sale of hydrogen gas through an integrated approach in various parts of Japan.

With this background, Air Water Hydrogen will renew its production plant at Nihongi by installing the VHR, a hydrogen gas generator that was developed by Air Water Inc. in 2019. At the Nihongi Plant, material gas to be purified into hydrogen gas has been supplied from an adjacent chemical plant. The VHR, which generates hydrogen gas by steam reforming natural gas, will be introduced to the plant. City gas will be supplied to the plant via pipes, which will enable improvements in cost efficiency and stable hydrogen gas production that will be unaffected by the amount of material gas supply. Production capacity is planned to increase by a factor of 1.3 after the renewal. Air Water Hydrogen will respond to the growing demand from existing users and expand sales in the Koshinetsu area.

The Air Water Group is introducing the VHR for large-volume users to establish new production sites and expand existing ones, as part of its efforts to strengthen its hydrogen gas supply chain in Japan. The Group has technologies that have been developed over many years, including technologies for gas purification and gas handling. While the demand for hydrogen gas for use as energy is expected to increase, the Air Water Group will contribute to building a hydrogen society through initiatives such as production of a supply system for hydrogen stations and a mobile hydrogen station.

With 11 sites for producing compressed hydrogen and nine for onsite supply of hydrogen gas (including five sites of the Group) in Japan, the Air Water Group supplies hydrogen gas in optimal ways. 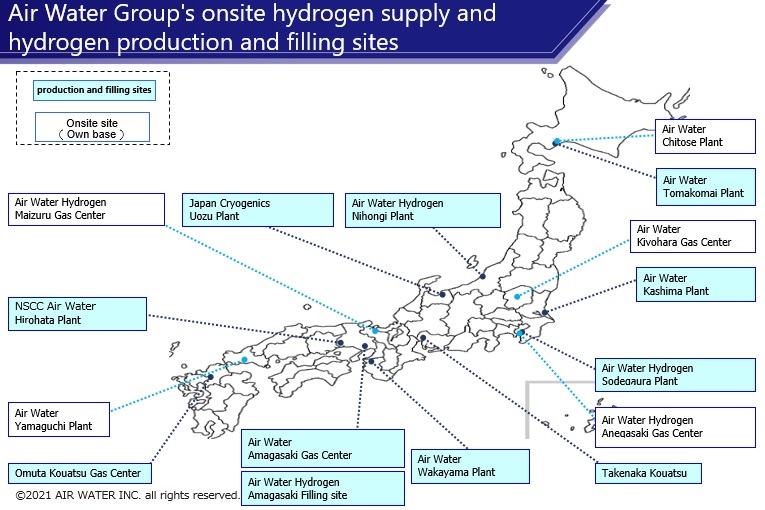 4. Purposes of use of industrial hydrogen
Industrial hydrogen gas is used for diluting material gas and as a working atmosphere in the manufacturing of semiconductors and liquid crystal panels, as a combustion gas for manufacturing optical fibers and glass, and as a working atmosphere for the thermal treatment of stainless steel and other metals, among other purposes. In many such cases, an industrial gas manufacturer supplies hydrogen gas to each plant. In addition to the above, refineries and petrochemical plants use hydrogen for desulfurizing crude oil, as a hardening agent for hardening oil as a raw material, and as an additive agent for generating plastics and other resins. In these cases, hydrogen is produced at each plant for self-consumption.

Methods of producing hydrogen gas include purifying hydrogen that is generated as a by-product at a large-scale plant, such as an ammonia plant, caustic soda plant, petrochemical plant, and steel-making plant, and steam reforming and water electrolysis of natural gas (methane) or methanol.
The VHR is a device developed by Air Water Inc. that is capable of generating hydrogen gas from natural gas with world-class efficiency. It is an environmentally friendly plant that also helps to reduce the use of natural gas as the raw material and power consumption for operation. Since the first unit began operating at Amagasaki Gas Center of Air Water Inc. in May 2019, the company has been installing the VHR at its own sites and at customers' plants for onsite supply. A total of five units are planned to commence operation within the current fiscal year. The company will continue to expand the network of sites for supply with the VHR, in its efforts to ensure stable supply. 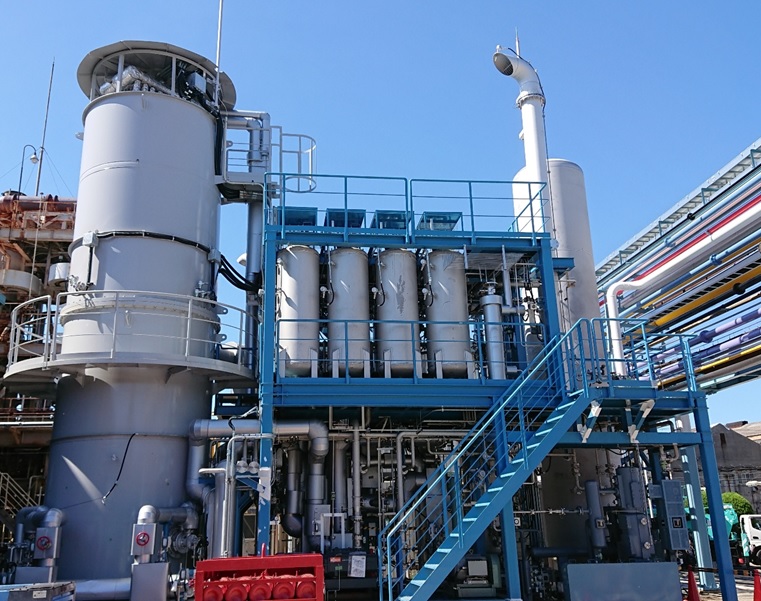